The #carefreeblackboy and #blackboyjoy hashtag has shown how beautiful and diverse black men and boys can be in a society that constantly questions their worth and very existence. The impact of racism and poverty has controlled the safety and freeness of the black community. The culture of homophobia and hyper masculinity has pressured black men to fit a certain narrative. This is not to say that if you do not fit this hashtag that you are a follower or a wannabe thug, it’s just a space to showcase an identity that has either been closeted because of judgment or frowned upon in society. The movement has consisted of black men rocking flower headbands to young guys showing off the latest dance moves in viral videos. Some artist have been left out of the conversation so I decided to create a list of artist who diversify the hashtag with their music, style, and public persona.

He is very vocal about his love for bright colors, flowers, and pretty sounding chords. Contrary to what the media focuses on, Tyler is a very talented musician; he produces all of his music, directs his music videos, runs his own annual carnival, manages his own colorful clothing line, all with an unfiltered attitude. In 2015, Tyler released his first magazine where he revealed a shirt he created with a reappropriated white power symbol with the gay pride colors. It doesn’t get more carefree than that! 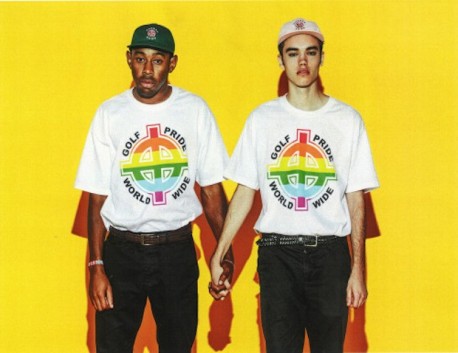 Watch the dreamy video for Perfect below:

The Chicago rapper is not afraid to show his joyous side; he recently fanboyed over Beyonce at this year’s VMAS. He showcased his love for his religion and the people of Chicago on his new album, Coloring Book. Check out Angels where he speaks on Chicago violence and shows off some dance moves with rapper Saba.

A great drummer, singer, and lyricist, with an even greater smile. He’s worked hard for some time now on his music and this year he is finally garnering some much deserved success. His album Malibu was one of the best albums I’ve heard this year. Check out his energetic performance of Come Down below.

The #carefreeblackboy does not only consists of flower head bands and pastel shirts. As we’ve seen through interviews and performances, Desiigner is very carefree in his happiness and energy. Hopefully he can keep this enthusiasm throughout his career. Watch this hilarious video of him and Kanye performing for a small crowd in the Hamptons below.

Chaz Budnick aka Toro Y Moi’s album, Anything in Return should be one of the soundtracks to the #carefreeblackboy hashtag. The below video came out a few years back but it’s one of my favorite songs from the album. Check it out.

He might seem like an unlikely choice for the hashtag; his videos are dark and he doesn’t smile much but Vince is very simplistic with his style; he doesn’t like to wear jewelry, he doesn’t smoke or drink and he has a very carefree sense of humor. Some say he is Twitter’s resident troll but there is a lot of truth behind what he speaks. Check out his hilarious breakdown of his visit to Bed, Bath and Beyond and love for couponing and discounts below.

The duo have an immense amount of energy and what I recently notice, a good guy, bad guy pairing. Slim Jxmmy seems to be the flamboyant, in your face, misogynistic brother while Swae Lee seems a tad less misogynistic with a permanent smokers face. They might not be the most lyrical but they bring a colorful spirit wherever they go. Check out their entertaining over/under interview below.

A mix of smiles, awkwardness and a free spirit. Raury came on the scene a few years ago with his hop-hop and folk infused mixtape, Indigo Child (the title alone screams carefree). Watch him run away from sin in Devil’s Whisper below.

Kaytranada is a very talented multi-genre dj and producer. He garnered rave reviews from his unofficial remix of Janet Jackson’s If back in 2012. In a recent interview with Fader magazine, he revealed his battle with loneliness, touring, and coming out to his friends and family. Watch him and his robot friend bust some moves in Lite Spots below.

His hair, his voice, his style embodies carefreeness. He shows his utmost appreciation and respect to women in his music and he has a gorgeous smile. His latest project, Bartholomew, is based on a character he created who thinks he works for NASA and is okay with being in the friendzone. Bartholomew sounds a little peculiar but the album is super soulful and super dope. Get to know more about his upcoming album below: