Former professor turned activist, DeRay McKesson can add podcasting to his many important ventures. McKesson will host his own podcast entitled, A Word with DeRay. The platform will provide much needed info on activism, organization, and how individuals can contribute to movements fighting against racism, policing, and other important topics. McKesson signed with Crooked Media, the new liberal political network founded last year by former Obama aides Jon Favreau, Jon Lovett, and Tommy Vietor. In an interview with BuzzFeed News, McKesson said, “I’m trying to figure out how we give people language that they can repeat. I think a lot of the media, not just podcasts, are doing a lot of the ‘Let me explain the world to you’ [format], but not in a way listeners can actually keep explaining the world to people.” He continued saying, “I want to be intentional about how I use platforms to amplify this work. I think a podcast will be a great opportunity to do that.” 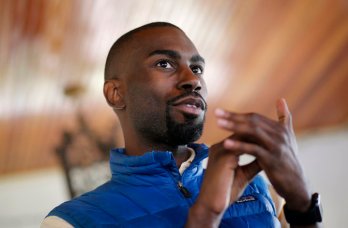 In this March 26, 2016 photo, Baltimore mayoral candidate DeRay Mckesson chats with campaign volunteers before canvassing in Baltimore. Mckesson is known on the national stage for his role in Black Lives Matter, but he’s struggling as he campaigns for mayor in his hometown. (AP Photo/Patrick Semansky)