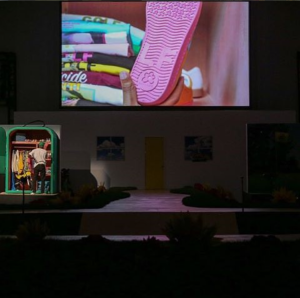 Tyler, the Creator held his first ever fashion show for his clothing line, Golf Wang at the L.A. Live Complex. If you aren’t a Tyler fan or are still caught up in the Yonkers hype from five years ago then you might be surprised by the bright and carefree aesthetic. The runway consisted of a revolving stage setup of Tyler’s room on the right and a golf scene and Coca-Cola inspired chairs on the left. A dreamy instrumental played in the background and a skateboard ramp centered out the middle of the runway. In the past, I’ve only caught glimpses of fashion shows but I know that the Golf Wang show was in a category of its own. The line consist of mostly male clothing with a small amount of apparel targeted to women. The garments include brightly colored shorts, button ups, skateboard decks, polo t-shirts, and the fan favorite socks.

Tyler’s out-of-the-box ventures are super inspirational. He is not only unique compared to other hip hop and black entertainers but also amongst all entertainers. He does WHAT he wants without approval from others. Instead of searching for a clothing line that fits his taste; he made his own clothing line to fit his taste. From his clothing line, Golf Media app, annual carnival, sketch show on Adult Swim, self-directed music videos and commercials, Tyler demonstrates that he is in a lane of his own and doesn’t plan on conforming anytime soon.